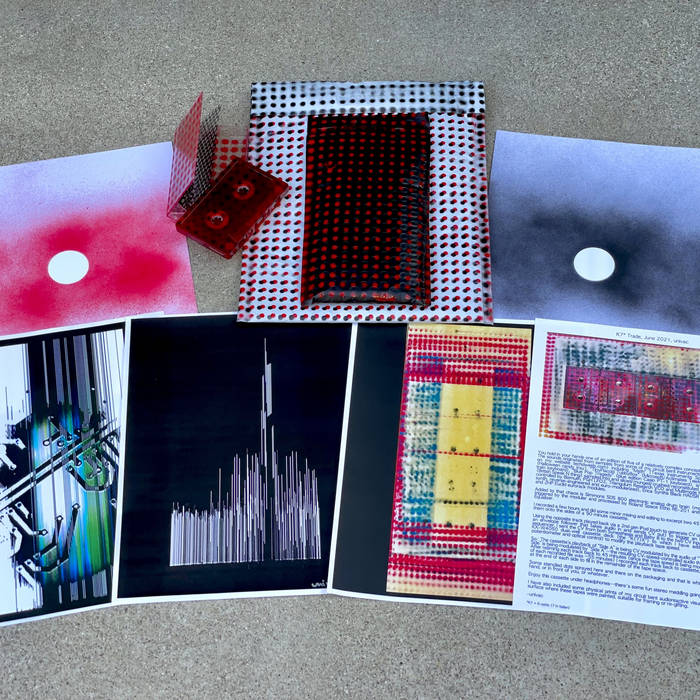 Added to that chaos is Simmons SDS 800 electronic analog drum brain (mostly on “The Other Side”), CV triggered by the modular and processed by Roland Space Echo RE-201 and Moog Three Band Parametric Equalizer.

I recorded a few hours and did some minor mixing and editing to excerpt two 45 minute sessions, then recorded them onto the sides of a 90 minute cassette.

Using the opposite track played back via a 2nd gen iPod touch to generate CV out (using Folktek’s Synesthesia, an envelope follower that takes audio in and sends CV out) to trigger an Error Instruments Baby 8 Pro sequencer, I sent the CV from both Synesthesia and Baby 8 to the two CV inputs of my circuit bent Kenwood KX-W4050 dual-well cassette deck (the "K(7)X") to which I have added CV inputs (in addition to potentiometer and optical control) to modify the playback tape speed.

So: The cassette’s playback of “Side A” is being CV modulated by the audio of “The Other Side” and “The Other Side” is being modulated by “Side A”—the resulting CV-speed-controlled audio then recorded back to computer. After retiming each track back to 45 minutes (since the tape speed is being modulated via CV the final runtime of each recorded file was ~55 minutes) I recorded each track back to cassette, along with a short bonus track at the end of each side to fill in the remainder of the tape space.

Some stenciled dots sprayed here and there on the packaging and that is what you now are holding in your hand, or in front of you, or whatever.

Enjoy this audio under headphones—there's some fun stereo meddling going on.

I also included in the packaging some physical prints of my circuit bent audioreactive visuals and a print of the stenciling surface where these tapes were painted, suitable for framing or re-gifting.