by Omnimedia vs BOLT: various artists 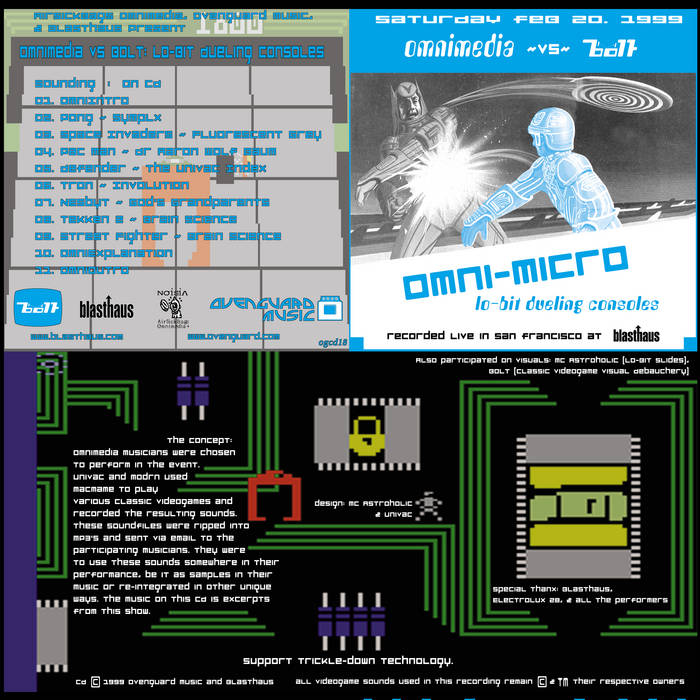 Omnimedia vs BOLT — Omni-Micro: Lo-Bit Dueling Consoles was recorded at a videogame-themed experimental electronic music show on 2/20/1999 at Blasthaus SF.

BOLT (Bureau Of Low Technology) were Blasthaus' in-house tech/projection/video game geeks and they covered the walls with classic video game 16mm promo film projections, with additional classic videogame slides and videos by by Electrolux28 and MC Astroholicus and mixed with univac’s projected NESbyt (a still-playable circuit bent Nintendo NES) all to a soundscape provided by 9 sound artists who were assigned sounds and effects from 8-bit classic video games to use as audio fodder in their live performances.

For the sounds I dug into many differerent classic video game ROMs with MacMAME, extracting the sounds via the ROM explorer, exported each individual sound effect for each game. I then assigned a game to each sound artist and sent them all the appropriate sound resources for them to use in whatever way they chose.

Tracks list each individual artist and which games they were assigned.

At the entrance to the show, audience members were greeted by the sounds of the videogames as well, randomly shuffled, as they entered the club.

Below is a short video artefact of the Omnimedia vs BOLT show at Blasthaus (with univac in the lighted fez providing the explanation), put together by Erich Shienke, BOLT media-monster and formerly of Blasthaus:
www.youtube.com/watch?v=Hm-u3sDAVcw

And, here is my TechDweeb.com page with more info:
techdweeb.com/OmniBOLT.html

This compilation was originally released on Oakland, CA CDR label Ovenguard Music in 1999 under catalog number ogc18, in conjunction with Airsickbags Omnimedia/noisa+, and the cover was designed by Erich Schienke & univac, with performance recording and edited excerpts by Erich Schienke.

It is still pretty damn good and timely with all these new-fangled 8-bitters jumping face-first into neo-nostalgicism.

(All videogame samples remain © and ™ their respective owners)